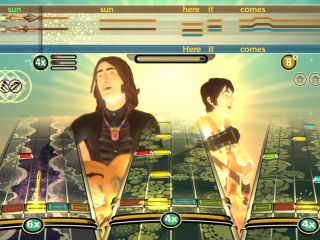 The complete version of Abbey Road is coming to The Beatles: Rock Band this week, Harmonix and MTV Games announced today.

Users who have purchased the massively popular video game already have six of the iconic record's cuts - Come Together, Something, Octopus's Garden, "I Want You (She's So Heavy), Here Comes The Sun and The End - but as of tomorrow (20 October) they'll be able to snatch up the remaining tracks.

Depending on which game system you have, things can get a little tricky, so read carefully:

PS3 and XBox 360 users can purchase tracks two ways: Maxwell's Silver Hammer, Oh! Darling and Because are available as individual downloads for $1.99 US each.

However, if you want those three songs and the wondrous Side B medley (and why on earth wouldn't you?) - and that includes the entirety of Her Majesty, all 23 seconds of it - you can nab the complete album pack for $16.99 US.

For Wii users, the three songs along with You Never Give Me Your Money are available as downloads for $2.00 US each. The medley, however, is divided into three multi-song downloads at $3.50 US each. (Her Majesty can be yours for a buck - did somebody say deal?)

According to the folks at Harmonix and MTV Games, full album versions of The Beatles' Sgt Pepper's Lonely Hearts Club Band and Rubber Soul will be coming to The Beatles: Rock Band in November and December, respectively.