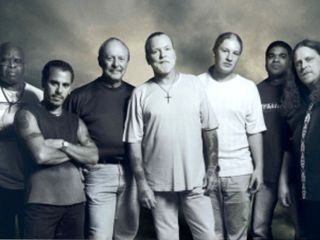 Gregg can show you his tattoos once again

The year didn't start out as planned for the Allman Brothers Band. In March, the band devastated fans by postponing its annual run of shows at the Beacon Theater in New York so that Gregg Allan could receive treatment Hepatitis C.

This week, however, the band announced its return to the road, and - following treatment - Allman is disease free and has made a "complete recovery."

"I feel great man," said Allman. "The treatment really kicks you in the ass but I came out stronger. I'm ready to play. I've known about having the disease for a long time, but was never a candidate for treatment until last year. When my doctor told me to go for the Interferon, I knew it would be a battle, but I'm great now. I just didn't have the energy to play, and we're a band that puts on two-hour shows that change every single night. You gotta be at full capacity to do that. And now I am."

On August 12, The Allman Brothers Band kick off a 22-date US tour on August 12 in Bethel, New York. During the first half of the tour, the Allmans will share the bill with Bob Weir and RatDog, and with Phil Lesh and Friends during the second half.