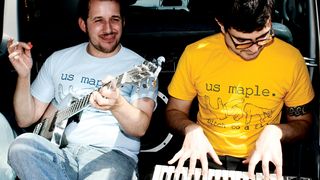 "With two people you can play around and make mistakes, and people don't realise you're making them."

Most bands we feature are shiny and new - but we'll make an exception for That F**king Tank. The Leeds two- piece actually formed in 2003 to honour a pre-booked date of their defunct previous band.

"We started the band as a bit of joke, but people came to like it," explains guitarist Andy Abbott. "I broke a string on the first gig and we didn't get to play our whole set, so they said, 'Right, you'll have to play again' - and here we are, 10 years later!"

The instrumental duo play riff-heavy "deconstructed rock music" with Andy taking cues from leftfield guitar bands such as Lightning Bolt, The F**king Champs and Captain Beefheart. It's a responsive, unrestricted form of playing, but not the kind that has you checking Twitter mid-gig.

"Me and James [Islip, drums] have been playing together since we were 11," explains Andy. "So there's an element of trying to disrupt the other person and throw them off track - with two people you can play around and make mistakes, and people don't realise you're making them."

Andy gets his frequency-filling tone from a custom aluminium Electrical Guitar Company baritone axe, which is then split through a Fender Twin and an Ampeg bass amp. "The guitar is tuned ADGADG," adds Andy. "So I play it in a way that sounds like two lines happening at the same time."

TFT's avant-garde approach has earned the duo support for Foals on their gigantic UK dates this February. "It will be interesting to play these super- huge venues," says Andy. "I don't think we'll be playing on the floor in the middle of the venue like we have in the past, but we'll play a lot of riffs people can dance to!"