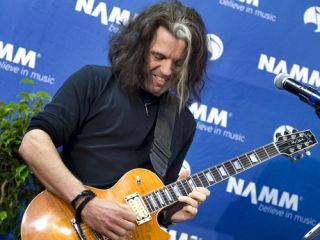 Before Alex Skolnick was known to the world as the lead guitarist for Testament, a featured played in Trans-Siberian Orchestra and the leader of the strangely named Alex Skolnick Trio, he was a Bay Area wannabe-shredder looking to sharpen his skills.

He did so with the help of a guitar teacher who would soon become famous himself: Joe Satriani. Recently, The Guantlet conducted an interview with Skolnick and asked him what it was like to study under the man we know now as "Satch."

"No, not until later. I was a very advanced rock player for my age. I listened to a lot of Van Halen and Randy [Rhoads] and then Yngwie Malmsteen. And then one of the next important players happened to be my teacher, Joe Satriani. I was with him for about two years when I was fourteen. I was an advanced player for my age, but didn't have a jazz background. I think it wasn't until I was eighteen that I first heard Miles Davis, and it really struck a chord with me."

How Joe Satriani found him:

"I found him. He was probably the busiest guitar teacher at Berkley and definitely the most respected. Everybody knew about him. He was in his mid to late twenties but all these younger players in their early twenties who were starting to get attention came from him. He was very feared. He was very strict and very serious. He definitely had a reputation for refusing to teach students that wouldn't practice enough. It was a bit of a bold move to take lessons from him."

"I asked him about it, and he thought it was a good idea for me to join Testament. He thought it would probably be temporary. At the time, I had no idea if I'd stick with the band or if it even made sense. Then things started going places. He wasn't really unfamiliar with that genre of music anyways. Kirk Hammett from Metallica studied with him, and the guys from Exodus would occasionally drop in for lessons. He was very supportive. The fact that he's Italian, it was like going to the Godfather for permission." [laughs]

Read the rest of the interview here.