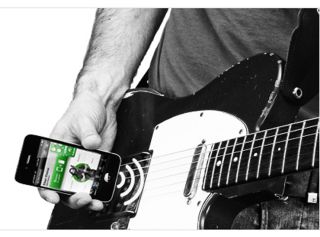 A clever idea by TC Electronic makes use of its TonePrint pedal technology, letting guitarists beam new sounds from an iOS app directly to their pedals via the guitar pickups. An Android version of the TonePrint App, which is free, is said to be coming in December too.

Check out the full press release below.

TC Electronic have developed a game-changing iPhone app for guitarists using its range of TonePrint guitar effect pedals. TonePrint pedals feature an amazing technology that allows users to upload custom-made sounds created by some of the best guitar players in the world. Until now, users have downloaded these TonePrints from the company's website and transferred them to their pedals via USB. Now, the new TonePrint App allows guitarists to simply hold the speaker of their iPhone above one of their guitar pickups to load new TonePrints into their pedals.

The idea behind the technology is as simple as it is ingenious. Each TonePrint has been converted to a unique-sounding magnetic impulse, but the sound does not carry any data. It doesn't matter if users are in a raucous arena or a library - no other sounds will interfere with the data being sent from the iPhone. The beaming process only takes a few seconds, and all of the TonePrints are stored within the app as mp3 files, which mean that an Internet connection is not required.

The new TonePrint app is available now on the Apple App Store and it is completely free of charge. The only requirement to take advantage of the app is one or more TonePrint enabled guitar pedals: Flashback Delay, Hall of Fame Reverb, Corona Chorus, Vortex Flanger and Shaker Vibrato. Currently, the TonePrint App is available for iPhone, but a version for Android phones is under development and will be available from December 2011.

"Most guitarists have their pedals in a rehearsal space and their computer at home. Some may have brought a laptop, but the process still needed to be made faster and more intuitive to really take advantage of the great potential that this artist-driven concept has to offer", says Product Manager at TC Electronic, Tore Lynggaard Mogensen. "We are proud to present a flexible solution that allows all guitarists with TonePrint pedals and an iPhone to truly explore the ever-expanding list of unique TonePrints created by some of the best guitar players in the world. Now great sounds and thereby musical inspiration can be beamed and enjoyed anytime anywhere."