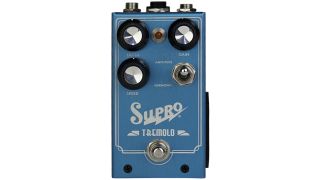 Since its return in 2014, Supro has been awfully busy, but besides its non-stop onslaught of vintage-voiced amps, it's been quietly beavering away on a range of pedals. We saw the first fruits of its labour earlier this year, but now the company has unveiled an amp-like Tremolo.

Preamp and power amp sections are paired with an actual output transformer for amp-like tone, while a built-in gain circuit allows players to overdrive the output stage. The overall output level is automatically compensated as you up the gain, too - very handy indeed.

Speed and depth controls handle the usual tremolo duties, while a TRS expression pedal can also be used to adjust the speed. The pedal operates on 9V battery or power supply and utilises noiseless true bypass switching.

The Supro Tremolo will be available in December for $229/£209. See Supro for more.