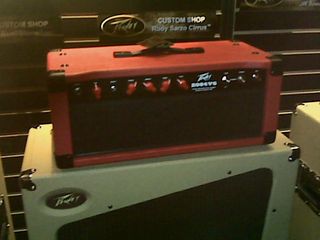 The big Peavey news at Summer NAMM 2008 is the expansion of the Custom Shopinto the personalized amp head business.

Two hand-wired models were on display, the 80-watt 80L6R and the 20-watt 2084V6. Both are Class AB and can feature reverb. The base boards are made of 610 Garrolite - very rigid and stable and less likely to absorb and muffle sound than other materials. The80L6R is outfitted with four 6L6 output tubes (fixed bias) while the 2084V6 houses two EL84 and two 6V6 tubes (cathode biased, selectable on the rear panel). Both can be modified to fit a user's own specifications.

"The V6 tubes give you more of a classic '50s tweed sound," says Tim Jauernig, Peavey's Custom Shop amp designer, "whereas the 84s give you something much like the '60s British rock vibe. Personally, I can't decide which sounds best, so it's nice to have both.

"The whole theory behind having the Custom Shop building amps is, we want to give customers what they want, not simply what we give them."

For more information, such as ordering, visit the Peavey Custom Shop.