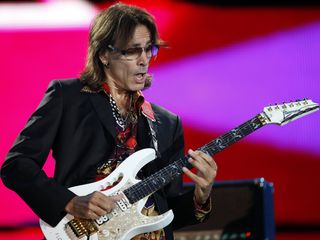 Want to transcribe The Black Page? You might be able to by the end of Steve Vai's online course (Image credit: RADU SIGHETI/Reuters/Corbis)

Steve Vai and and the Berklee College Of Music are now offering players all over the world the chance to learn the master guitarist's secrets in an exclusive new 12-week online course, Steve Vai Guitar Secrets.

Vai is participating in what is being called the first-ever online course of its kind, which will allow guitarists to gain a deep understanding and command of the playing styles, repertoire, techniques and musical concepts of the guitar legend and Berklee alum.

The program will present an "under the hood" look at the work of one of the world's most influential guitarists. Through playing exercises, listening examples, hours of never-before-seen video, song transcriptions, performance assignments - and even a live chat with Vai himself - students will not only learn the secrets behind Vai's best known compositions and virtuosic techniques, but will also learn how to improve their own solos, chord and rhythm playing and overall voice on the guitar.

Placing emphasis on the "hows" and whys," the course will spotlight a different Steve Vai composition each week and explore all the relevant topics and techniques related to that song, including soloing, rhythm playing, scales, bending, tapping, sweep picking, sliding, time feel, tone, bending, articulation and use of the whammy bar. You will also listen to a number of Vai's first-hand anecdotes and inspirational lessons, including many behind-the-scenes stories about playing alongside the composer and guitarist Frank Zappa.