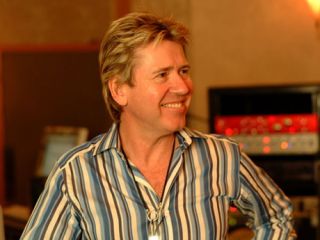 Why is Steve Lillywhite smiling? Hey, if you had his CV, you'd be one happy camper, too!

Over the course of his three-decade-plus career, producer Steve Lillywhite has been the boardsman behind groundbreaking albums by the likes of Peter Gabriel, Dave Matthews Band, Morrissey, XTC and dozens more. But it's his long association with U2 (he produced their debut, Boy, as well as other seminal works for the Irish superstars) that has brought him his highest acclaim.

And so it came as no surprise when Bono and The Edge, writers of the music - and, in many ways, the creative engines - for the much-troubled, enormously expensive Broadway musical Spider-Man: Turn Off The Dark, turned to the man who helped define U2's early sound to help them tweak the songs and helm the CD of the show.

"There were so many problems at first, as everybody well knows," says the affable Lillywhite. "[Original director] Julie Taymor left and other people came in [new director Philip William McKinley and writer Roberto Aguirre-Sacasa], and then Bono and Edge started writing some new songs. I felt like a babe in the woods in many ways, because usually I have a sense of what kind of record we're going to make. Working on a musical and making this album was a whole world of new for me. In the end, though, it was amazing, and I think the results speak for themselves."

That they do. Performed mostly by lead actors Reeve Carney (who is backed by his real-life band, Carney) and Jennifer Damiano, with Bono and The Edge making scant but vital appearances, the numbers on Spider-Man: Turn Off The Dark rock with authentic swagger. Even the ballads manage to land an arrow in one's heart without coming off as mawkish or smacking of "Broadway-itis." While traces of the U2 sound are noticeable throughout (and perhaps unavoidable), the score finds Bono, Edge and Lillywhite exploring previously uncharted territory - and winning big-time.

MusicRadar spoke with Steve Lillywhite days after the musical's opening (check out our review of the show and CD here). Charming, witty and remarkably candid, the mega producer gave us the scoop on his maiden plunge into the Great White Way.

How exactly did you get involved with Spider-Man?

"I got a call from Bono saying, 'I want you to see a performance of this show.' So I went, and during the intermission we went to a room in the theater to talk. 'It doesn't sound very good, Bono,' I told him. 'No, you're right!' he said. 'These musicians are fantastic, but something isn't translating.' He was kind of annoyed, really, because he and Edge had spent so much time and effort into writing the music. Bono knew there were things that had to be fixed, but he couldn't put his finger on what they were.

"My first job was to try and make sense of the sound. Part of it had to do with the arrangements, which were very dense. But then there was the actual sound equipment, as well. Because this was a Broadway theater, you know? It wasn't a rock concert. So we got some new equipment in, then moved musicians around and did some cosmetic changes.

"We didn't have a lot of time. Juliet was getting pretty fraught with wanting to make changes but not being able to. She was so close to it, and as Bono has said, she got to a point where she just couldn't 'see it' anymore. My job was to come in with fresh ears and bring it home - as I've done on a few U2 records that I didn't produce all the way through."

Some of the players are from Reeve Carney's band.

"That's right. His band is the musical nucleus of Spider-Man. But then there's two other guitar players, another bass player, a percussionist, a hammered dulcimer player, some violinists… There's 19 musicians altogether. It's a lot of people to corral and, you know, get on the same page."

When you first saw the show, had you already heard all the negative publicity surrounding it?

"Oh, yeah, yeah! At this point, [actor and stuntman] Chris Tierney had already suffered his fall and almost died. He's now one of my closest friends, by the way - an incredible guy. But that had happened and there were so many negative things. Still, there was something to the music and the whole thing that pulled me in.

"Plus, I know when Bono's bullshitting and when he's not. [laughs] I've known him for 30 years, and I can tell when he's passionate about something - The Edge, too. I felt there was a lot of good, a lot of greatness that wasn't coming through somehow."

When you produce a U2 album, you have input into the songs and arrangements. Was this any different, or were the songs "locked"?

"No, no, this was the same arrangement as when we make a U2 record. Of course, it's not a U2 record, but the sound is there - you can't get away from that. Bono and Edge basically said to me, 'Steve, here are the songs. Make an album.' It wasn't 'Here's the songs. Make a cast album.' So I had a lot of freedom to help Bono and Edge realize the full potential of their songs. And there are songs on the album that are quite different from what's in the show.

"It went back and forth a bit. Working on something like this is like working with a moving target. Nothing was set in stone. Once some of the music people in the show heard the recordings we did, they said, 'Oh, that sounds so much better.' Even though I was concentrating on the album, that made me and everybody feel pretty good about the overall picture."

How did the time factor affect your job? With U2 albums, you have much more time than with something like Spider-Man.

"Well, yes and no. Making this album, in many ways, was just like making a U2 record. I've done U2 albums where Bono is finishing a lead vocal right up to the last minute. Same thing here: Reeve was singing the lead vocal to Boy Falls From The Sky in LA during rehearsals for American Idol - Bono had changed some of the lyrics. All of these situations can be quite chaotic. But Bono believes that great art comes from chaos."

"Absolutely fantastic. He's a huge talent. His whole band, Carney, is great. They have a real connection between them. Reeve and his brother, Zane, have that wonderful singer-guitarist vibe going on. I'd love to work with them in the future. I think they have a lot to offer."

Jennifer Damiano, who plays Mary Jane, has a beautiful voice.

"Oh, she's great! I think she has a future making music, if she so chooses. She might go more for acting because she's a terrific actress. But vocally, she's quite strong. I think If The World Should End is beautiful and poignant, and she really pulls it off."

Of all the songs, were there any that you changed dramatically?

"I'd say…probably Picture This. There was something about it that made me think it could be a hit. Bono decided to try and do a vocal on it, and in fact, his vocal worked better than Reeve's, so we stayed with that. But Bono tried to sing the chorus on Rise Above, and he just couldn't do it as well as Reeve. Some songs worked better for different singers. Picture This, though, I spent a lot of time on because I thought it could be on the radio."

Was producing strings and an orchestra a new experience for you?

"Yeah! It made me feel a bit like a grown-up. [laughs] You'd think that I might have done more with orchestras and things given how many records I've done, but this was a bit of a new thing for me. There I was in the studio with 20 and 30 people, and they've all got music on stands, all those notes written out. And I'm just a punk producer, really, I can't read music! [laughs] It was strange and funny, but I'm glad I did it."

Even though, as you said, this isn't a "U2 album," you were working with half the band. Did that feel strange?

"Not really. Bono and Edge wrote the songs, but they weren't in the studio all the time. So it wasn't like working with half of U2 and I'm going, 'Where's Larry and Adam?' This was very different. On U2 albums, things are very democratic, whereas this time, a lot of the decisions were left to me. Luckily, Bono and Edge agreed with those decisions." [laughs]

Overall, what is your impression of the show now as opposed to the version you first saw?

"Oh, it's so much better! Unbelievably better. I think it's a lot of fun now. It's bigger in the heart, the characters are so much better, and it flows now. The first version…there were things that were just painful! [laughs] That's nobody's fault. Things just needed time to be figured out. To me, one of the biggest aspects that had to be brought out is the central theme: With great power comes great responsibility. That wasn't in the first version, oddly enough."

Having now "done Broadway," so to speak, would you consider taking on something like this again?

"I would love to! During the party for the show when we played the music for everyone, the producers turned to me and said, 'Steve, we've never had a record like this.' I think they meant that in a good way. [laughs] But Broadway's a strange old creature. It's very different from my rock 'n' roll world, but there is some common ground. And if I do another show, I'll probably discover more and more of it."