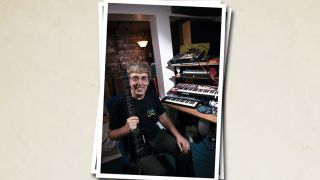 The psychedelic guitar maestro tells us tales of unlistenable vinyl, an invisible guitar and why his teenage self had it sorted as he fields the 10 questions we ask everyone...

"My first guitar was a six-string Spanish guitar and I got it when I was nine. It would have been around 1960 and the first song I learned to play on it would probably have been a Lonnie Donegan song like My Old Man's A Dustman.

"But my dad bought me the Strat on the front cover of Motivation Radio because I went to a public school - the City Of London School - and I did quite well on my O Levels and I won a scholarship, which meant that my father didn't have to pay fees any more and he bought me that guitar. We found it through Exchange & Mart or Melody Maker - one or the other, I don't know.

"It was originally white, but I tired of the whiteness and so I scraped it all off and varnished it and my dad helped me a bit. That was the main guitar I used with Gong, but I also had a Les Paul that I used a lot and an SG; they were the three guitars, really. I'd say I probably used the Strat around 50 per cent, Les Paul around 30 per cent and 20 per cent SG."

The building's burning down; what one guitar from your collection would you save?

"My Steinberger. Although I wonder if it might come away unscathed with all that carbon fibre. You never know!"

"I use Jim Dunlop Tortex, 0.73mm thickness. They're sort of medium, I don't like them too light or too hard. If they're too light, they're too bendy, and if they're too hard, they're just too heavy for me."

If you could change one thing about a recording you've been on, what would it be and why?

"The vinyl version of Rainbow Dome Musick was completely unlistenable because of the scratches. It was only when we got the CD that we could actually listen to the thing.

"The LP came out originally in 1979 and it was clear vinyl and generally, coloured vinyl is not as good as black because of the way they have to clear out the pressing thing - there's a whole esoteric explanation for that. There were just a lot of 'Rice Krispies' on it, but we couldn't really change that because that's all there was in those days."

"Five minutes before I go on stage, I'll check my tuning, go to the toilet, crack a few jokes... and afterwards, I'll normally have a drink."

What's the worst thing that has happened to you on stage?

"I did a gig on acid and my guitar disappeared while I was playing it. It was rather unpleasant, but I lived to tell the tale. It was a Gong gig in a Spanish town near Barcelona called Terrassa and it all went a bit pear-shaped! Miquette [Giraudy, keyboards/vocals] was there, but she wasn't actually on stage and she helped me keep it all together."

"Never for a moment have I ever thought of quitting music. At school, we had a band and the other guys wanted to do it professionally and left the school to do that and that band eventually became known as The Egg.

"For various reasons, partly because of the fact that my father had bought my guitar, I couldn't leave the school. I couldn't do it; it was just impossible for me - I just didn't want to, it didn't feel right.

"Later, I went to Kent University and found that I was suddenly at the epicentre of the Canterbury music scene and music became increasingly important in my life and I left the university. So I did what the other guys did but a few years later."

What aspect of playing guitar would you like to be better at?

Is there a myth about you or your guitar playing that you'd like to set the record straight on?

"There's nothing too colossal. Two little snippets I could give you: there's a Gong live album called Gong Est Mort, based on a Paris concert we did in 1977. It was a kind of brief reunion, and my face on the artwork is whited out and a lot of people think it's because I had some sort of nuclear row with Daevid Allen and it's absolutely not true.

"Another one to do with Gong: it used to irk me that, in 1975 when Daevid Allen left the band, people were saying, 'Steve Hillage is the new leader of Gong.' But I had nothing to do with Daevid leaving at all. I wasn't even around at the time, I was finishing the Fish Rising album, but people were talking like I'd made some sort of coup d'état, which was absolutely not the case."