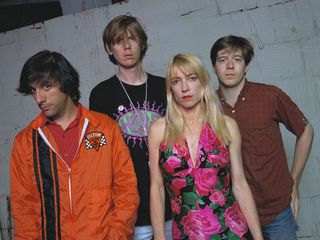 It's enough to make you want to tune your guitar: Sonic Youth's Kim Gordon and Thurston Moore have announced the end of their 27-year marriage, leaving the future of the pioneering alt-rock band, very much in doubt.

The musician couple confirmed the news in a statement from a representative at Matador Records which reads, "Musicians Kim Gordon and Thurston Moore, married in 1984, are announcing they have separated. Sonic Youth, with both Kim and Thurston involved, will proceed with its South American tour dates in November.

"Plans beyond that tour are uncertain. The couple has requested respect for their personal privacy and does not wish to issue further comment."

Sonic Youth's 16th and most recent album was The Eternal, released in 2009. It received universally glowing reviews.

In a 2008 interview with Spin, Moore talked about how he and Gordon maintained their marriage: "There's no secret. We've never sold each other out on anything. I can easily follow the allure of wanting to go out and be with the boys, and play industrial noise and smoke pot and drink, but nothing replaces the reality of our relationship. I can't trade that for anything.

"I can't think of how or where I'd be without Kim's influence. And we're like any couple that's been together for close to 30 years. There's a genuine psychophysical connection. Sometimes I feel things happening in me, and I know that something's going on with her. When you're married and you have that kind of connection, you become really spiritually, psychologically connected. We grew up together, in a way."