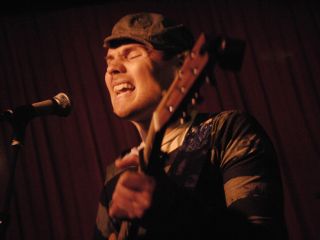 With 19-year-old Mike Byrne newly installed as the Smashing Pumpkins' drummer, we figured it might take some time to hear music from the band. Not so. Billy Corgan has announced plans for a gargantuan 44-song album to be called Teargarden By Kaleidyscope.

You read correctly - 44 songs. And get this: it won't cost you a penny to own them all. That's right, Corgan says the whole kit and kaboodle is on him.

The only catch? Not all 44 songs will be available at once. Corgan is intent on releasing tracks to fans as the band finishes them.

"My desire is to release a song at a time beginning around Halloween of this year, with each new release coming shortly after until all 44 are out," Corgan writes on the band's website. "Each song will be made available absolutely for free, to anyone anywhere. There will be no strings attached

"Free will mean free, which means you won't have to sign up for anything, give an email address, or jump through a hoop. You will be able to go and take the song or songs as you wish, as many times as you wish."

For those who crave physical CDs, Corgan says he won't disappoint: he'll be issuing 11 four-song EPs - for sale, not free - throughout the 44-song process. And it you want a big box set of Teargarden By Kaleidyscope, the Pumpkins main man says you can eventually buy one of those, too, only it won't be a recompilation of the EPs (so we're assuming there might be alternate versions, added tracks and whatnot).

Although the whole 'free will mean free' tactic is a fan-friendly endeavor which has worked out well for Radiohead and Nine Inch Nails, we have to assume Corgan, who hasn't been packin' the arenas as he once did, wants to sell a fair amount of those EPs and box sets.

After all, it's going to take more than just his good looks to pay Mike Byrne, to say nothing of his other as-yet-unnamed Pumpkins bandmates.