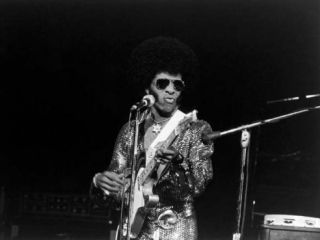 Sly Stone: whatever he's got to say, it should be worth hearing.

Sly Stone is one of music's most intriguing characters, so our ears pricked up when we heard that a rare interview with the psychedelic soul legend is to air on 25 May.

This will be broadcast on the Morning Becomes Eclectic show on US radio station KCRW at 11am Pacific Time (89.9FM). You'll also bee able to tune in on KCRW.com.

Details regarding the interview's content have already been released, so we're assuming it's been pre-recorded (which, given Stone's history of erratic behaviour, is probably for the best).

The conversation with DJ Chris Douridas promises to cover Stone's gospel roots, a stage appearance with Sam Cooke, and even a story about Charles Manson. Sly will also discuss his work as a radio DJ in San Francisco.

You can also look forward to hearing classic Sly and The Family Stone songs, plus an unreleased track by the Stone family's gospel band The Stewart Four.

(Via Raised On Indie)