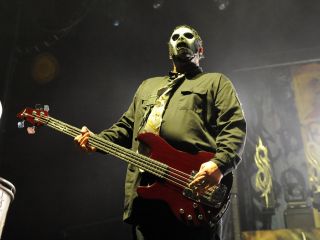 Slipknot have revealed that their original guitarist, Donnie Steele, is set to rejoin the band for their upcoming summer shows. Steele will assume bass duties in place of the late Paul Gray, who died last May after an accidental morphine overdose.

Steele joined the band when they were still called The Pale Ones. He played guitar on what would become Slipknot's 1996 self-issued album, Mate. Kill. Eat. Repeat, but would leave before its release due to his Christian beliefs.

In a statement on Slipknot's website, the band said: "Donnie was in the band at the very beginning, and rather than get an outsider, we thought it would be a fitting tribute to Paul to play with someone from within the family. Donnie was great friends with Paul and we can't think of a better way to celebrate his memory than with someone who was there with us at the very beginning.

"The eight of us are looking forward to being onstage again and honoring Paul's legacy with our families in Europe and Brazil this summer."

Even though Slipknot are playing various Sonisphere festivals, the overall future of the band is very much in doubt. In an interview with Undercover, singer Corey Taylor, who also fronts Stone Sour (and who has recently been rumored to replace Scott Weiland in Velvet Revolver) said, "Obviously, we're doing these shows in the summer at Sonisphere and that's pretty much gonna be us dipping a toe in the water to see what happens. To me, it's baby steps. I think everybody's racing ahead without realizing that we kind of have to pick ourselves up first.

"Everyone needs to be realistic about it, and it seems like I'm the only one who's being realistic," he continued. "And it's a heavy responsibility to be the guy who is kind of coming off as the doomsayer. But at the end of the day, that's respect. I'm not just racing right ahead and going, 'Oh yeah, we're gonna go!' I lost my brother last year, and people need to understand that and respect it before I start getting all 'hip, hip hooray' about everything."