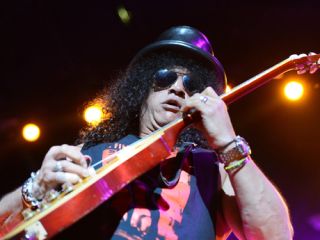 Now you can walk on Slash and he won't mind a bit! © Matthias Balk/dpa/Corbis

Slash is no stranger to placing in the upper echelons of Top 10 lists, but as of today (10 July), a higher number will no doubt be near and dear to his heart - 2,473, to be exact, for that's the number of the star he just received on the famed Hollywood Walk Of Fame.

Speakers at the ceremony included film producer Robert Evans and radio personality Jim Ladd, but it was actor Charlie Sheen who provided the zingers: "It's quite fitting that Slash is getting a star on the very street Axl Rose will one day be sleeping on," he said. Later, he added, "This star is going to be stepped on more than the coke we did in the Eighties."

After the event, Slash and bandmate Myles Kennedy treated fans to a private acoustic performance and exclusive question-and-answer session at the Hard Rock Café on Hollywood Boulevard.