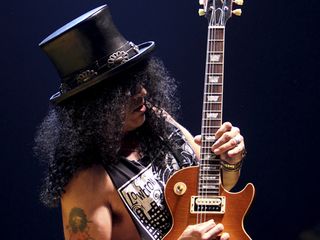 It's still 11 days until Guns N' Roses are inducted into the Rock And Roll Hall Of Fame, and already Slash is tired of talking about it - more specifically, whether the original band members will all be in attendance and might perform together at the Cleveland ceremony.

"Everyone has been asking me what's going to happen, and they know as much as I do," Slash told Rolling Stone. "I feel you're totally obligated to be present, and I would love to fucking play, but it's just something that's not gonna happen for whatever reason."

The biggest reason, it would seem, is a still unresolved, longtime feud between the guitarist and singer Axl Rose. In 2009, Rose called Slash a "cancer." According to Slash, things haven't improved since. "He hates my guts," the guitarist said. "It's over a lot of different stuff; I don't even know. There's just no communication between us."

Of the original GN'R lineup, only Slash, Duff McKagan and Steven Adler have said that they plan to attend the Rock Hall event. Former band keyboardist Dizzy Reed made a statement that original member Izzy Stradlin was going, but former GN'R drummer Matt Sorum, speaking to VH1 Radio Network, repudiated that clam.

"I asked Slash if he would do it," said Sorum, "and Slash's answer to me was that he spoke to Izzy and Izzy wasn't planning on coming. So I think that was like, if Izzy's not going to come and it's not all the original guys, then it doesn't make sense."

Starting 3 May, fans will get plenty of chances to see Slash live when he heads out on tour to promote his upcoming second solo release, Apocalyptic Love. Just confirmed is a special album release show at New York's Irving Plaza on 22 May, the same day the record streets in the US.