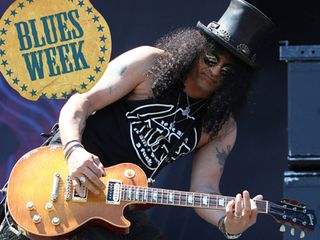 Through his illustrious career with Guns N' Roses to Velvet Revolver and right on up to his recently released, star-studded solo album, Slash has proved himself to be a master of instantly memorable, titantic riffs and scorching solos.

Recently, MusicRadar sat down with the chapeaued guitar hero to discuss his upcoming Epiphone 'Appetite For Destruction' Les Paul (due to hit fine retailers near you in October). During our chat (coming to the site very soon!), we asked Slash about some of his early influences - specifically, the blues.

Why? Because as anyone who's voted in our poll will know, next week is Blues Week on MusicRadar. We'll have our definitive list of the best blues guitarists of all time, gear buyers guides, tuition guides and lessons, an exhaustive track-by-track review of the forthcoming deluxe reissue of Stevie Ray Vaughan's Couldn't Stand The Weather plus interviews with everyone from Robert Cray to Jimmie Vaughan - and that's Jimmie talking about the memory of Stevie Ray in an exclusive interview you have to read!

Back to Slash! As it turns out, the blues played a major role in his musical development.

"All of my playing is basically influenced by blues players," says Slash. "That might sound surprising, but really, that's where my whole trip comes from.

"Like a lot of people, I started backwards. Growing up, there was all kinds of music being played around me, and blues was definitely a part of it. I didn't know I was an aspiring guitarist at the time, however - I didn't pick up the guitar till I was 15."

As a young player, Slash was turned on by Keith Richards, Eric Clapton and Jimmy Page.

"Then there was Jimi Hendrix and Mick Taylor and Jeff Beck - all of my information was coming from the classic '60s and '70s players."

Over the course of the next few years, Slash started to check out the guitarists who influenced his first wave of idols.

The kings of the blues

"I realized that the licks were pretty much the same stuff I'd been listening to all along - only the context that was different. I've listened to a lot of great blues guitarists, but the two guys who I go back to consistently are Albert King and BB King. Their appeal never fades.

"Albert King I love because of his singing, screaming, one-note bends. He's been a huge influence on me."

"And with BB, it's that one-note thing, too, but it's more about his overall style period. Everything he does just speaks volumes. The two players… Whatever it was about their sound and approach, it really got to me."

"If I had to choose a third player, it would definitely be Buddy Guy. He's a big one. He has this, like, mayhem approach to the blues. [laughs] I always liked what he did. It was rough and gritty."

In conclusion, Slash says, "That's what great about the blues: whatever you want to do with it, it can work if you do it with spirit and attitude."

Come back later this week for more Slash as he talks exclusively about his Epiphone 'Appetite For Destruction' Les Paul. Come back Monday 26 July (next week!) for Blues Week - don't visit a crossroads without it!