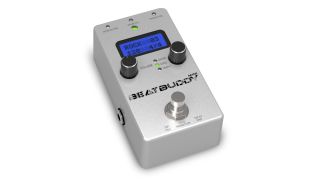 We loved the concept of the original BeatBuddy 'personal drummer' pedal, and now Singular Sound has announced a downsized incarnation, the BeatBuddy Mini.

The BeatBuddy Mini offers the same ease of use and live beat control - tap the footswitch to fill, hold to transition, double-tap to end - as its predecessor, but in a more compact enclosure, with controls for volume and genre/song/tempo, plus a diddy LED screen and footswitch compatibility.

Although there's a smaller feature set - with fewer upgradable features, limited drum set versatility, and no compatibility with USB, SD cards, MIDI or headphones - the Mini comes in at half the price of the original: $149, as opposed to $299.

The BeatBuddy is available from December - you can preorder now at Singular Sound.