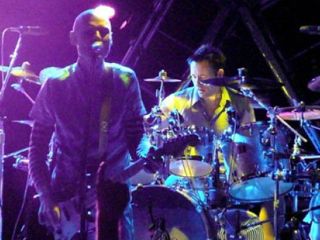 The Smashing Pumpkins will start recording new material later this spring, says drummer Jimmy Chamberlin, but fans looking for a proper follow-up album to last year's Zeitgeist are out of luck.

"It's something we're going to get to on May 1st," Chamberlin says. "We just bought a building, and my wife and I are in the process of moving back to Chicago. Billy [Corgan] and I are going to start working every day like we used to.

"But I don't think we will make records again," the drummer explains, pointing out that the band's contractual commitment to Reprise Records is finished. "I look at it like the old business model is dead and the music business doesn't know how to move forward. We want to keep things vital and keep things viable and get our music across while remaining relevant. Music has in many ways just become an advertisement for your tour.

"I think what we'll do is start releasing songs," Chamberlin continues. "The record or CD format places too many limitations on your piece of art. People just don't buy records anymore. Anyone under the age of 24 just buys songs. It's just in our best interest to release blocks of songs. And I think what we'll do - not to let the cat out of the bag too much - is to create the framework where we can release a number of songs and maybe create a title. We can gather three or four songs, but it will all flow up to a larger body of work. But to call it record in the traditional sense would be anachronistic."