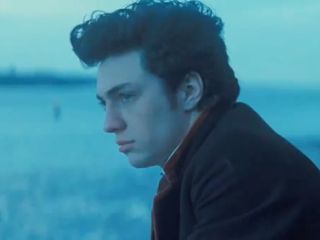 The trailer for Nowhere Boy, the film based on John Lennon's turbulent teenage years, has debuted, right before the movie premieres at the London Film festival.

Based on the memoir Imagine This: Growing Up With My Brother John Lennon by Julia Baird, Lennon's half-sister, the film was directed by Sam Taylor-Wood, scripted by Matt Greenhalgh (Control) and was filmed in Liverpool.

Nowhere Boy, which stars Aaron Johnson as Lennon, details the Beatle's early life when he was raised by his Aunt Mimi, portrayed by Kristen Scott Thomas. Anne-Marie Duff plays Lennon's mother Julia, who gave him to Mimi when he was four years old.

As can be seen in the trailer below, the film documents Lennon's discovery of rock 'n' roll (his mother taught him banjo chords, which he transferred to the guitar) and his meeting with another young Liverpool lad, Paul McCartney, played by Thomas Sangster.

The drama is said to be less concerned with the formation of The Beatles and more on Lennon's tangled relationships with his mother and aunt. (Julia was killed in a car crash in 1958 when she was 44; Lennon was only 17 at the time.)

Whether any actual Beatles songs make it to the film is unclear, as its release date and distributor in the US (previously it was reported that the Weinstein Company picked up the rights). But what is known is that the movie will hit UK cinemas on 25 December (and 26 December in Australia).