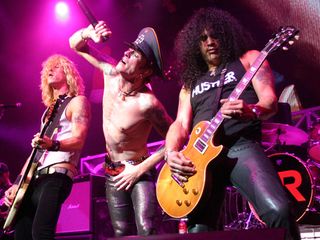 Things have been quiet on the Velvet Revolver front for a couple of years - until now. The other day, ex-lead singer Scott Weiland, who famously quit the band in 2008, announced that he had found his replacement: himself.

"We've all grown a lot," the singer said about the past rocky relations within the group. "We're able to put egos and differences and old … conflicts aside and so that's really cool."

What's more, Weiland said that he was already working on new material with some of the members. "They gave me a couple of songs, and myself and Dave [guitarist Dave Kushner] and Duff [bassist Duff McKagan] are gonna be getting together for a song writing session next week."

The singer also said that the reunited group would be hitting the road for a short tour before the end of the year. "Slash's solo album gets released [on 22 May] and so he's gonna do some touring on that and then we're gonna go and do some [Velvet Revolver] shows in the later part of summer into early fall."

All of which was news - big news - to Slash himself. During an interview with a Minnesota radio station yesterday, the guitarist, when told of Weiland's statements, said, "[Scott's] out of his mind."

Later, he did say that he would have to check in with his former GN'R and Velvet Revolver bandmates. "Maybe [Weiland and drummer Matt Sorum] know something I don't."