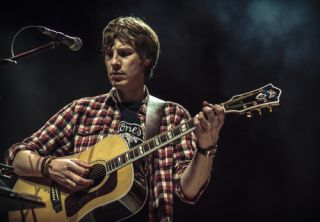 ACOUSTIC EXPO 2013: Winning an Ivor Novello award for your songwriting is to a musician what an Oscar is to an actor. Acoustic singer-songwriter Scott Matthews knows that feeling well, having won the prestigious award for his beautiful song Elusive.

We couldn't think of anyone better to give you some advice on songwriting and arranging acoustic guitar with additional instrumentation. But first, it's time to unpick Matthews' gear collection and to find out how he got started in music...

How long have you been playing guitar for?

"Music has always been a big thing in my family. My dad played drums in a covers band in the late 70s and one of my earliest memories was of a drum kit being stored in the living room between gigs. It wasn't until I was around seven or eight that I got interested in guitar. I asked my folks for an electric guitar on my 11th birthday - that was a pivotal moment in shaping my passage in life!"

Did any particular artists inspire you when starting out?

"Well, as if getting a guitar wasn't enough of a birthday present I also acquired the Jimi Hendrix Smash Hits and Electric Ladyland vinyls - complete with naked women on the front! I played those records to death and was going into music class showing my friends how to play Purple Haze on my Marlin Strat. By the time I was 18, I was obsessed with all those rock dudes who could play fast and furious. After that phase subsided I opened up to all kinds of influences from Fleetwood Mac to Soundgarden to Stevie Wonder. In my twenties, I discovered John Martyn and all those fantastic songs and tunings. That discovery helped me channel all I'd learnt into something more worthwhile."

You play Guild guitars. What is it that you like about them?

"I've always been drawn to Guild, partly because most of my influences played them. I remember buying my first Guild - a 1977 D-25. It's without doubt the one guitar I can take into battle and still come out with unscathed. It's built like a tank and sounds as sweet as a blackbird at the crack of dawn. The new Guilds are even better. I've been fortunate to try the new prototype Orpheum series. They're unreal; light yet rock solid, and the attention to detail is insane. They sound like nothing else, and the 30s era design ethos also ticks a big box for me."

In the following video, Matthews plays the title track from his 2009 album Elsewhere on a stunning Guild Orpheum Jumbo guitar.

What about amps and pedals?

"I have a custom made switcher box from Bright Onion pedals for three acoustic DI lines that are then sent back through my effects pedals and into the superb Fender Excelsior. It's a 1x15 valve amp that kicks ass. It's the only amp I can use that's very comfortable in dealing with the low-end frequencies of an acoustic guitar. I also use an Electro Harmonix Holy Grail and a Boss tremolo pedal."

Which instrument is your go-to for writing?

"Generally I start with guitar because it's the instrument I feel most comfortable with, but over the last few years I've been playing more piano and that approach has surprised me. I still don't know most of the chords on piano but I usually construct ideas around the melody that's in my head. I love the accidental stuff that creeps in too, which can influence a new bridge idea or middle eight section.

"With regards to the acoustic guitar, I'd be lost without one. It helps me more than any other instrument to express myself. I can play around with all kinds of textures from delicate fingerpicking on the classical guitar to crazy bombastic Open C tuning songs on a Jumbo 12-string inspired by the likes of Leadbelly. That versatility is what keeps me coming back. The acoustic guitar is a pure songwriting beast, and the fact you can take it anywhere is a bonus."

What are your tips for arranging acoustic guitar with sitar, piano and pedal steel, which have also featured in your music?

"I try to enhance the sentiment of the song's lyrics with whatever is lying around. I try not to flood a song with frequencies that clash, which is why sitar, pedal steel and piano are great. They leave room for the purity of an acoustic guitar sound to blossom whilst taking the song to another dimension with their underlying drones or chiming like textures.

"For me it's about providing the song with what works best. If an instrument sounds cool, give it space to breathe rather than throwing stuff at the wall to see what sticks. Maybe that's why Elusive worked more than other songs I've recorded in the past - it had an emptiness combined with an unexplainable undercurrent that captured the essence of the words."

When preparing a live set, do you change your arrangements much?

"Set lists, to a degree, are dictated by whoever is around at the time. If it's a solo show, I've got a fair idea of what works. Over the years we've changed the vibe of many early album songs. Our band sound always feels different to the albums (in a good way). I struggled in the early days because it was just me trying to play multiple guitar parts, but now my guitarist, Greg Stoddard, adds depth to the songs. If anything, some songs have grown to greater heights than their album counterparts. That's the one thing I've learned: let the song develop over time before committing it to an album."

Any other final words of advice for aspiring songwriters?

"Go with your gut instincts generally and when that fails, put the kettle on and come back to it with a fresh approach. Try something unconventional and avoid the 'go to' instruments. It's amazing how you can make a snare drum sound with a bag of coins, a chain or a tea strainer! To quote Oscar Wilde, 'Be yourself because everybody else is already taken'."

For more information on Guild, please visit their virtual booth.