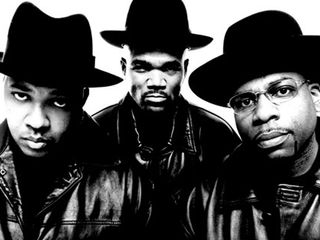 As the second hip-hop act inducted into the Rock And Roll Hall Of Fame (following Grandmaster Flash & The Furious Five), Run-DMC - Joseph 'Run' Simmons and Daryl 'DMC' McDaniels - will be on hand at tomorrow's ceremony in Cleveland. But they won't perform.

The reason? Out of respect to their late DJ, Jason 'Jam Master Jay' Mizell, who was murdered in 2002.

After Mizell was gunned down, the duo pledged they would never perform as Run-DMC again, and they intend on sticking to their word.

"For me, I tell people, 'Do you want to see me and Run running around without Jay?' " DMC told MTV News. "They tell me I could get Grandmaster Flash [to fill in]. But I can get any DJ in the world if I want. It wouldn't be right. I can't replace my drummer."

Eminem will induct the pioneering rappers into the Rock Hall Of Fame. Other acts being honored include Metallica, Jeff Beck, Wanda Jackson and Little Anthony & The Imperials.