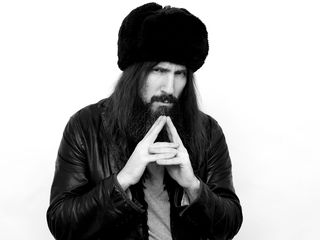 Guns N' Roses guitarist Ron 'Bumblefoot' Thal is recovering from minor injuries he received in a serious accident that involved four cars. Thal was driving his silver Toyota Camry on Tuesday 31 May when an SUV rammed into him.

"SUV just ploughed into me at full speed," he tweeted from the scene. "My car is totalled and two other cars she smashed me into. I'm well enough to tweet, which means I'm not dead yet."

Thal later posted a picture of his wrecked Toyota (below), with the message: "24 hrs dealing with car rental, insurance & collision folks, lease & bank, police, as the injuries begin to reveal themselves... Thank you Toyota for the functional seat belt, air bags & crumple zone, you saved my skull."

Indicating that he hasn't lost his sense of humor, Thal responded to concerned fans by tweeting, "O please, I'm in GNf'nR - this is all like a walk in the park, lol! B'doom CHA! (That was a joke btw... tapping mic... 'this thing on?')

Of his injuries, Thal made the following tweet just moments ago: "Medical checkup this morning, don't seem to have any major issues other than a hairy back and a funny voice." He also included a link to a most appropriate video (below). MusicRadar wishes our good friend Ron 'Bumblefoot' Thal a full and speedy recovery.