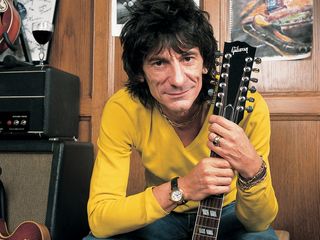 Wood has to choose between booze and big bucks

How do you know you have a drinking problem? When Keith Richards tells you to cool it with the booze. Just ask Ronnie Wood - the 61-year-old guitarist has reportedly been warned to quit partying ways or risk being axed by The Rolling Stones.

This comes at a time when the veteran band are planning an autumn US tour.

A source told Britain's Daily Express newspaper that "all the band have to have a compulsory pre-tour medical to make sure they can get insurance."

According to the source, "Ronnie failed his medical for the 2002-2003 tour because he was drinking seven times the recommended number of alcohol units a week. He had to spend months drying out at a clinic in Arizona.

"There are worries that could be the case again this time."

Last August, Wood was treated for his alcohol addiction at the Life Works clinic in Surrey, England, following a 10-day drinking binge in Ireland with his 20-year-old Russian girlfriend, Ekaterina Ivanova.

It could be a particularly bitter blow if Wood is banned from The Rolling Stones' upcoming tour, as it has been said that he is the driving force behind getting the band back on the road. Until recently, he had been pushing for a Faces reunion, only to see it fall apart.

For that kind of money, we'd quit... just about anything!