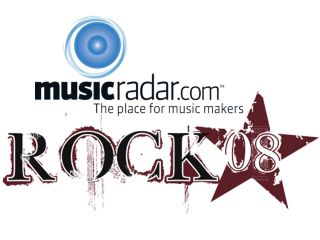 MusicRadar is backing the RockStar 08 contest

Glastonbury founder Michael Eavis, Peter Gabriel and Scouting for Girls have joined together in a search for Britain´s next musical stars, in the RockStar 08 competition.

The winners of RockStar 08 will get an awesome prize, including a two day recording session at Gabriel´s world-famous Real World Studios, a performance at the Autumn Equinox party on Glastonbury´s on 23 September 2008, and the chance to play a live set at 2009´s Glastonbury Festival.

Michael Eavis, Glastonbury founder, said, “This competition will allow us to gather some of the UK´s new rock talent and ultimately find one of the next big things in the world of music. Glastonbury is all about amazing talent we hope RockStar 08 will find a Glastonbury headliner of the future.”

Any unsigned rock band or performer can enter, with 24 acts selected for the live heats in Pilton, scene of the Glastonbury Festival, infront of celebrity judges. Five bands will then make it through to the final on 5 September at a party including a set by Scouting For Girls.

MusicRadar is the official online partner of RockStar 08, so the best bands or artist (especially the winner) will get lots of coverage on MusicRadar too. What´s not to like?

Entry forms can be downloaded from www.rockstarbands.co.uk and you´ll need to submit at least two tracks. Entries must be in before 27 May 2008, so get to it!