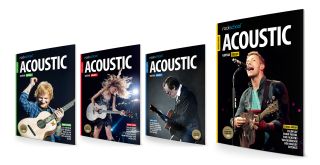 Acoustic guitar players wishing to specialise in rock and pop can study for Rockschool's grades (which range from the beginner level Debut Grade up to Grade Eight) which have been designed, according to the organisation, to 'improve your playing ability, expand your technical proficiency and give you a solid grasp of music theory'. For students who are planning to study at university, Grades Six, Seven and Eight also carry UCAS points.

What makes the syllabus especially exciting is that it's based around learning iconic tracks by artists as diverse as Foo Fighters, Van Morrison, Adele, Tom Petty, Ed Sheeran, Eric Clapton, John Mayer, Newton Faulkner and many more. So, as well as studying for a recognised qualification, you'll also be learning arrangements of songs that you love.

Rockschool's guitarist Andy G Jones talks about recording and arranging the tracks in this video:

For more information head to www.rslawards.com