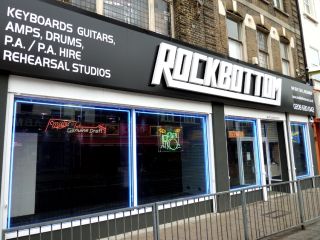 PRESS RELEASE: Rockbottom Music which has been based in Croydon, South London for over 36 years, and still one of London's biggest music stores on two floors has its grand reopening starting on Wednesday 28 March 2012, with the members of Whitesnake making a guest appearance and signing in store from 5:30-6:00pm, followed by a show at Croydon's Fairfield Halls on the same day. The show is scheduled to start at 9:30pm and tickets are £12.00 in advance from the box office.

Following the civil unrest and rioting back in August 2011, Rockbottom along with Reeves Furniture and other business in the locale were heavily looted and severely fire damaged, and the shop has since been closed for extensive building and refurbishment work since then.

The shop is now ready for the 21st Century with a complete refit, including suspended trussing, LED lights, full wall display glass cabinets, and specialist guitar, amp, PA and drum departments, as well as specialist books and on site tuition. The new music production and recording department is now open.

Call the store on 0208 680 1042 or visit them at 68-70 London Road, Croydon, CR0 2TB (300 yards from West Croydon Station) for professional advice, sales and an unbiased, in-depth knowledge of everything musical.