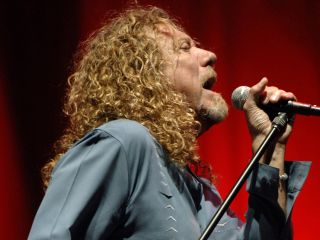 A familiar sight greeted Robert Plant as he took the stage for a "secret" gig in London's West End on Wednesday night (September 1). The vast majority of the 200-strong audience comprised fan club and internet competition winners, a couple of dozen of whom were sporting Led Zeppelin T-shirts of varying vintage.

The designs ranged from recent(-ish) promotional items for 21st century Zep compilations all the way back to well-worn apparel emblazoned with tour dates from legendary early 70s American jaunts, but Plant's only tangible acknowledgement of his erstwhile group came when he slyly referred to the One Mayfair venue (a former church) as a "house of the holy". The night was all about his new album, Band Of Joy, and the group of musicians given the same name who joined him to play some of its choice tracks.

Press and fan speculation of all full-blown Zep reunion reached fever pitch after the band reconvened for a one-off charity show at the O2 Arena in London in late 2008, but Plant distanced himself from any such thoughts, and Band Of Joy is why.

Having notched up three million worldwide sales in the company of Alison Krauss on 2007's Raising Sand, the new album reveals itself to be its predecessor's close cousin, another thoughtful collection of other people's songs performed in a rich Americana vein.

Krauss was absent this time round, her role filled by a fellow country chanteusse of formidable critical cachet, Patty Griffin, to provide harmonies and call-and-response exchanges with Plant, who was also joined by guitarists Darrell Scott and Buddy Miller (the latter the album's producer), bassist Byron House and drummer Marco Giovino.

The musicians even had the look of a dustbowl orchestra about them, all frayed denim shirts and weather-beaten hats, and set about replicating the record's rich sepia hues with the confidence of a unit who'd been playing this kind of stuff together for years, maybe decades.

Plant himself was the picture of elder statesman rock legend, grasping the mic stand with a commanding presence as he led his charges through the potent prairie balladry of Townez Van Zandt's Central Two-O-Nine and the aggressive folk of Richard Thompson's House Of Cards. However, he seemed to kick things up an additional gear or two on the more traditional numbers in the half-hour set, Cindy I'll Marry You Someday and Satan Your Kingdom Must Come Down.

Six of Band Of Joy's 12 tracks were given an airing, and the set concluded with a non-album treat, a stirring rendition of Aaron Neville's gospel lullaby I Bid You Good Night, which featured the entire band on harmonies, with Griffin and Scott each given a solo verse.

"See you tomorrow," Plant said, as he left the stage, referring to the start of the outfit's European tour, but with such a powerful new combo at his disposal and Zeppelin reunion rumours seemingly put to rest, there's no reason why tomorrow shouldn't stretch on for a few more years yet.