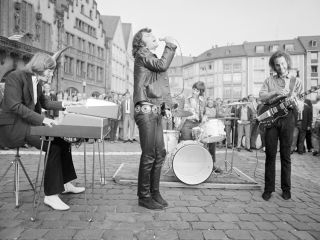 Robby Krieger is the latest guitarist to be honoured by an 'Inspired by' instrument from the Gibson Custom Shop. The August issue of Guitarist magazine - onsale now - features an in-depth review of the new, very cool Gibson Robby Krieger SG VOS.

Meanwhile, The Doors' legendary six-stringer took the time to shoot the breeze with Guitarist about his signature instrument, the guitar loves of his life and the small matter of why The Doors never had a live bassist...

Why did you get an SG in the first place?

"It was kinda of an accident. I'd seen Chuck Berry play one night back in the days when he was great. He was really great. Up until that time I was really just playing flamenco guitar and folk music, stuff like that.

"I saw this red guitar and I thought, it looks like Chuck's (laughs) even though, of course, it wasn't. Chuck had his ES-335 semi hollow but it looked close enough. It was also the cheapest guitar they had. It was the SG Special with P90s, this was 1964."

So you were very new to the electric guitar when you formed The Doors?

"Yes, absolutely. I'd only been playing electric for about a year."

But aside from it being red, what attracted you to the SG?

"I liked how it looked. I liked the two horns that kinda looked like a devil's pitchfork, you know? It had a really cool look and I said man, look at all the frets on that, you can get up really high on that.

"And it sounded good. I got this great old Magnatone amp, two 12-inch speakers, it just sounded great through that amp. Anyway, that was the guitar I used on the first Doors album. That original one got stolen unfortunately but I bought many others after that."

Isn't your Gibson 'Inspired by' model is based on the 1967 SG Standard you play?

"Yes, I got that one about 12 years ago and it's become my main SG. It was just a lucky find. My roadie, Marco Moir, was in this guitar shop and he said I should check it out. I went down and liked it and I've been using it ever since."

"It's kinda wider and flatter at the back I always liked that kinda neck - that's why I liked the ES-335 because its similar. But you never seem to find that on the SG unless it's one of those Les Paul/SGs, the earlier ones. So my neck is a combination."

Because of your beginnings on the flamenco guitar, do you play with your thumb behind in a more classic position?

So the new SG neck is actually quite similar to a classical?

"Yes, especially a flamenco neck which has a really quite flat [backed] neck. Yeah, you know I never thought about that."

What about the Maestro vibrato?

"I use it selectively, not a lot but it definitely has its uses. I wouldn't want to be without it."

You weren't tempted by a Bigsby?

"No, the Maestro goes out of tune a little bit but I like how it sits on the guitar, I've tried the different ones and you might have to change the bridge but I just like this one.

"See I've been working on this thing [signature guitar] for almost 20 years. They [Gibson] had something they were going to put out from me 15 or 20 years ago. A great guitar, I still have it.

"It was an SG body with a graphite neck and it had gold hardware, a Kahler whammy bar and all this stuff but they scrapped it because they said it would have been too expensive.

"But finally we've got a good team together to produce this one; Pat Foley has been overseeing it and it's finally coming out."

P-90s or PAFs, which is your preference?

"The P-90s were kinda a cheaper model back in those days. I think every other SG I've bought since that one has had humbuckers.

"I recently got another SG with P-90s that I use for slide mainly but there's the feedback thing. I like both sounds but I guess I'm more comfortable with the humbuckers."

The SG is perfect for slide, isn't it?

"It is but on the [Doors] recordings I never used an SG. I had, I still have, a 'Black Beauty' Les Paul and also an old Silvertone that I used for slide. Yeah, the SG is good for slide but I didn't use it back then because I need those slide guitars in different tunings so I'd need different guitars."

Do you have any favourite slide tunings?

"I use mainly three different ones for different songs… dropped D, a minor tuning, you'd have to ask my roadie, Marco, cos he tunes 'em up!"

So you'd tune the guitar to the song?

"Absolutely, I'd try different tunings until one worked. Like on End Of The Night, that's a minor tuning."

You started on flamenco so do you use a pick, fingers or both?

"I do both. I've been playing more flamenco lately. I've got a new album coming out shortly with some flamenco on it. It's called Singularity."

Did you use the Magnatone amp for that first album too?

"No, for that I rented a couple of Fender Twins. Pretty much most of The Doors albums I'm using a Twin."

Effects were in their infancy. Did you indulge?

"I tried to stay away, except for obvious distortion pedals and wah-wah. To me there are certain pedals that would date a song. Paul Rothchild, who's our producer, he always tried to talk me out of using anything too crazy."

Why did you record with a bassist but play live without one?

"Mainly what the bassist would play was what Ray [Manzarek, Doors' keyboardist] would play with his left hand and he used a Fender Rhodes Piano Bass that sat on top of his organ - it was like a small Fender Rhodes but just the bass notes.

"So the bass player would pretty much copy what Ray was doing, but not all the time. We had some great players. The first guy we had was Larry Knechtel and he played on Light My Fire and some other songs on the first album. He pretty much copied was Ray played with his left hand.

"On the second album [Strange Days] we had a guy named Doug Lubahn, he played in a band called The Clear Light who were also on Elektra at that time. He was a really creative player he came up with the line on Strange Days. Love Me Two Times is cool too. He did a lot of cool stuff.

"But you're right when we played those songs live we were missing that bass. Today we do have a bassist: Phil Chen, he's great."

But it's quite trendy today not to have a bassist, The White Stripes or Yeah Yeah Yeahs, for example?

"But the fact that we didn't have a bass player meant Ray had to play the bass lines and because he was playing organ and bass, the bass lines had to be like on automatic pilot so he didn't have to think about what he was doing and that made it very hypnotic, which kind of made our sound hypnotic with those bass lines, like Riders On The Storm - check that bass line out.

"It works great on a keyboard but it's not something you'd think of playing on a Fender bass. It worked for us."

Roadhouse Blues is now a hard rock/blues standard and Lonnie Mack played bass on that, correct?

"Yes, just that song. He wasn't playing at that time. He was actually selling Bibles and a friend of ours invited him to work at Elektra, at the office there. But we were recording and we said we need a bass player, why don't we ask Lonnie? Maybe he can play bass too.

Didn't you play Roadhouse Blues with Creed at Woodstock '99?

"Yes that's right. Very cool but I didn't realise how loud they played - a lot louder than we ever played. I had my two little Fender Blues Devilles and each of them had like four Marshall stacks each.

"I couldn't hear anything I was playing, luckily I knew what I was playing and could hear through the monitors.

"But to be honest, I never thought I'd still be playing rock'n'roll at this point. But what better thing could there be: to do what you like and make some money out of it? Not many people are that lucky."

To read the full review and hear an audio demo of the Gibson Robby Krieger SG VOS, check out issue 318 of Guitarist magazine, onsale now.