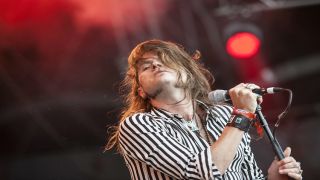 "I love people that write and sing with their heart" (Image credit: GIAN EHRENZELLER/epa/Corbis)

As the soul-loving frontman for blues rockers Rival Sons, Jay Buchanan is seemingly able to emote pain, project honesty and belt out ear-piercing notes all at once.

The singer is one of the breakthrough vocalists of the last decade, his swaggering style perfectly sitting atop of the Sons' bombastic blues. As a man equally in love with Nina Simone and Steve Marriott, we knew he'd be the perfect person to ask about singers, honesty, the importance of emotion and why artists beat X Factor every time...

Who was the first vocalist whose voice you fell in love with?

"My favourite vocalist on the whole face of the earth is my mother. My mom was the one that listening to her voice singing to me as a child, and she would sing in church, that was the sound of honesty.

"That taught me the difference. Even in church I would hear other women sing, but I would listen to my mom and think, 'She is really on it.' And that wasn't because she was a better vocalist, it was because her heart was in her voice. That was the big one for me."

How about when you began to discover artists for yourself?

"There are so many vocalists, everyone from Otis Redding to the whole Staples family to Nina Simone. This is a rock 'n' roll band though, and when it comes to rock 'n' roll, one of the greatest blue eyed soul vocalists - in my mind he is the greatest - is Van Morrison.

"You have a lot of people that talk about David Coverdale, Robert Plant, even Steve Marriott. Steve Marriott was fantastic. I just heard Steve Marriott for the first time about two years ago. I've never been a rock 'n' roll guy, really. But I heard Steve Marriott and right away I listened to him and went, 'That's it.' The guy connected with me and he was connecting with every part of his being. That is the mark of a real vocalist."

"But, you get someone like Van Morrison, he stepped out of the rock 'n' roll game very early but with one hand he could crush those other vocalists because his voice has so much emotion. His voice is directly tied to his heart, and he is a brilliant writer. That all comes across in the way that he treats his voice, it sounds different on every song."

Is that a key philosophy of yours - placing emotion and feel above technicality?

"There are so many vocalists that when it comes to technicalities they can hit all the notes and do all of these things, but they don't have the heart and the perspective behind it. That is totally meaningless and it is lost on me.

"Going back to someone like Van Morrison, he is a master of the craft and emoting. It's not just about displaying heartache and emoting the pain, it's about emoting hope and displaying the possibilities of what can be. When I listen to his music I can hear that, and it fills me with hope and with creativity."

There's a strong element of the blues in Rival Sons' sound, was that a genre that inspired you vocally?

"My favourite blues voice would be John Lee Hooker. His voice just sounds like it grew out of the ground like a tree. Blind Willie Johnson is another big one, that deep, almost harmonic voice. Then everyone loves Howlin' Wolf.

"For us, as white dudes in 2013 you hear about the blues and think it is about pain, no, it is about life, love and experience. It's not just about pain. In our lifestyle now we are without pain, we have every luxury known to man."

You draw on a wide range of styles vocally, from soul to blues to rock...

"It's one big soup pot of all of these great, talented people that I have been so fortunate to have in my life. The fabric of my influences are much broader than I can ever understand.

"My influences span across so much because you never know exactly what is going to truly seep in. Even still, I have always been a collector of music, but I will keep going back to somebody that I was listening to maybe when I was 12 or 13 and haven't listened to since. You'll go back and reference it and think, 'Wait a minute, I completely forgot about this person.'"

You mentioned Plant earlier, are you a big fan of his?

"Robert Plant is brilliant though and I, along with so many other people, owe a debt to him. I have always been attracted to the innovators more than anything. People like Van Morrison and Eric [Burdon] with The Animals. He was never so much of a writer but his voice early on was just commanding."

Is there a direct link between an artist that writes their own material and an ability to portray emotion and feeling in their voice?

"I like artists. I love people that write and sing with their heart. One that I always go back to is Joni Mitchell. I love her early period, her pre-Blue albums. I don't remember the first time I heard Joni Mitchell because when I was really young, like two or three years old. My mom was always singing Joni Mitchell.

"I do remember the first time that it really grabbed me though. I was about 11 years old and I was listening to her and Joni's voice, her young voice, as she got older I definitely appreciated her voice, but her young voice just felt like home to me. You get her voice along with the writing. Her way of turning a phrase and singing from the heart was extremely attractive to me."

How does the current trend of X Factor-type shows line up with your beliefs on the importance of artists' connecting with their songs?

"I have always been attracted to people that sing honestly. When you hear an honest voice it has that sound of the truth to it. Unfortunately that is rare. Most of the time you turn on the telly and see all of these reality programmes and people wanting to be famous and so they are trying to sing flawlessly.

There are singers out there that can emote without having written the material though, aren't there?

"Someone like Frank Sinatra wasn't so much of a writer, but he was an instrument for the writers. He completely emotes and was able to drive it home. But then you get someone like Ray Charles, his voice, the young Little Richard, hey even old Little Richard, incredible!

"You have artists with deep, rich voices that don't over sell their voices, they can just do it mid tone. Look at Leonard Cohen in his later years. Now, he just has a deep, rich timbre and it is authoritative. I totally enjoy that."

Are there any vocalists that you think aren't given the dues they deserve?

"Someone like Johnnie Ray came up in the early '50s, that was his heyday. But stardom escaped him. He had been arrested for soliciting sex from an undercover agent. He was a homosexual, he was deaf in one ear so he wore a big hearing aid, he had a speech impediment, he was arrested for drugs, all of that stuff.

"But he was a precursor to Elvis. Elvis talked about Johnnie Ray like Johnnie Ray was the man. I was never really a big Elvis guy. Growing up I was much more tied up in the blues and Elvis' influences rather than him. Elvis always seemed more like the face of a musical movement to me. But hell man, what a voice."

Looking ahead, who are the young voices that we should be listening to?

"Looking at contemporary voices, Yolanda from the Phantom Limb, she has a wonderful voice, it just blows my mind. She is a good friend of mine and she just melts me. I love her voice.

"I like Ty from Vintage Trouble's voice as well. That's soul music all the way. We played with each other all the time way before our bands blew up over here in the UK. He's someone that I can respect so much because he's there and he is extremely present when he sings. His vocal prowess is evident but he is singing from his heart, that is what it is all about."