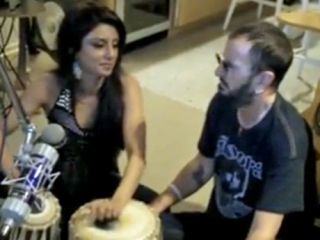 Frustrated drummers, take heart: Even an ex-Beatle needs a music lesson every now and then. Such was the case whenRingo Starrwas taught to play the tabla by Indian musicianTina Sugandh.

Sugandh, born in Bombay but raised in New Jersey, calls herself TablaGirl. She's released her own music and has scored tracks on films such as Around The World In 80 Days and Ice Princess.

The chance to hang with Ringo Starr and actually school him in the correct way to play the tabla hand drums (as seen in the video below) came about through their mutual friend, producer Dave Stewart. Needless to say, Sugandh jumped at the opportunity.

"Going to his house was the most incredible experience," she said. "Ringo is so gracious and kind, charming and hysterical, and really is a star - no pun intended. But what I love most is his humility - and he said something I'll always remember: There was a half-full bottle of water left on the table that no one claimed, and it upset him. 'This much water could save a child's life in another country,' he said, and to hear that from a Beatle's mouth was so cool!"

In turn, Starr was knocked out by Sugandh, and he must have realized that when it came to the tabla, leaving it to a pro wasn't such a bad thing - Sugandh plays (and even sings) on Ringo's newest album Y Not.