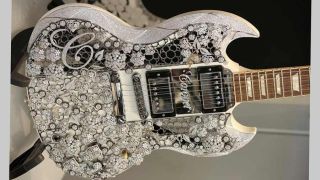 Is this the most valuable guitar ever made?

The 'Eden of Coronet' is an SG encased in over 400 hefty diamonds set in 1.6 kilos of 18 karat gold and was produced by a combined team of 68 people, racking up a cumulative total of 700 work days.

Gibson Brands, jewelers Coronet, Hong Kong luxury conglomerate Chow Tai Fook and designer Mark Lui aim to get the Eden officially certified by the Guinness Book of Records as the most valuable guitar ever made.

Chairman and CEO of Gibson Brands, Henry Juszkiewicz said, "The masterpiece is a joint effort of three distinct brands. The creativity comes from the process of blending ideas and cultures from different industries, which further solidifies Gibson beyond just a guitar brand."

The Eden of Coronet will be on heavily-guarded display at Musikmesse 2015, but we're fairly confident we won't be bringing you a review anytime soon.