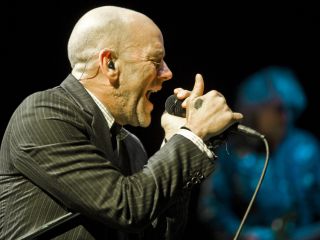 Michael Stipe and co have been enjoying the sights and food in Berlin. Oh, they made a new album too (Image credit: Chad Batka/Corbis)

REM have completed recording their yet-to-be-titled 15th studio album with producer Jacknife Lee at Berlin, Germany's Hansa Studios and will mix the record in the fall.

The CD, due out in the spring of 2011, is the band's follow-up to 2008's Accelerate. While the group haven't offered many details about the new recording, they did write on their website that "Berlin is a pulsing, exciting city with so many varied and distinctive neighborhoods, iconic history all around, great food at all levels and from every corner of the world...an excellent place to set up camp and make a great record."

REM's manager Bertis Downs later added, "I will not report on the sound or the dimension of the recordings so far, to my ears it all sounds like quite a wonderful set of songs." (Well, OK, then. What was he supposed to say - the record's lousy?)

In unrelated REM news, the expanded 25th Anniversary edition of the band's third album Fables Of The Reconstruction has been released. The album, originally issuedin 1985, is available both digitally and in a two-CD format. It features the digitally remastered original album, plus 14 previously-unreleased demo recordings. The commemorative release also adds new liner notes by guitarist Peter Buck with the two-CD package presented in a lift-top box with a poster and four postcards.

"The Athens Demos," as the band dubbed them, comprise the new edition's second disc of 14 previously unreleased recordings, including drafts of Fables'11 songs and three additional tracks that didn't make the album. The three non-album demos include two early versions of songs that were later revisited by the band and recorded for other releases. One track, Throw Those Trolls Away, makes its official debut on the new edition.