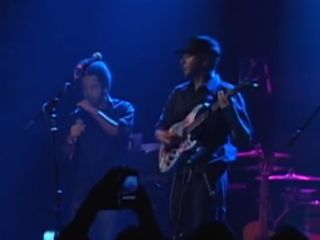 Riley and Morello clean up as Street Sweeper

Tom Morello has raged against machines, he's been a Nightwatchman and now he's a Street Sweeper. Actually, that's the name of the band he's formed with Boots Riley from The Coup.

Little is known about Street Sweeper at this point, other than they've recorded an album, which Morello describes as "huge steamroller riffs combined with depth, charge, funk." (From Morello, we'd expect nothing less.)

Riley says the band has a message, and it's somewhat Rage-esque in nature: "This is a time when the working class is being fleeced left and right. More families will be homeless and more people will be jobless. They'll need something to listen to on their iPods while storming Wall Street."

Band to tour this summer

When not storming Wall Street, they might be packing arenas this summer, as Street Sweeper as been added as the opening act for the Nine Inch Nails/Jane's Addiction tour.

Want a preview? Check out this video shot last fall on Morello's Nightwatchman tour when he and Riley were working out a song called 100 Little Curses.

Street Sweeper are currently negotiating a record deal, and they plan to have their debut disc out soon. You can hear another song, the subtly titled Fight! Smash! Win! on the band's official website.

As for Rage Against The Machine, a spokesperson for Morello said, "Everything's still the same. They'll continue to be a live entity and play shows, but there are no plans for them to record new material."