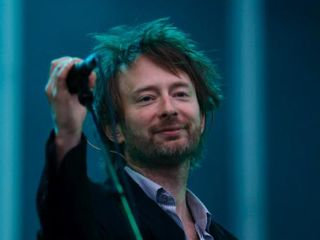 Yorke would look even happier if his new group had a name (Image credit: Sylvain Lefevre/ASA/epa/Corbis)

Days after releasing a double-A single Feeling Pulled Apart By Horses/The Hollow Earth, Radiohead's Thom Yorke has announced he's formed a new band - don't worry, it's just a side project - with which he intends to play live shows.

In a blog on Radiohead's Dead Air Space, Yorke discusses the new outfit, and mentions upcoming gigs at the Orpheum Theatre in Los Angeles on 4 and 5 October:

"In the past couple of weeks I've been getting a band together for fun to play The Eraser stuff [Yorke's 2006 solo album] live and the new songs etc..to see if it could work! Here's a photo:"

Yorke adds, "We don't really have a name and the set will not be very long cuz ...well...we haven't got that much material yet! But come and check it out if you are in the area. We've also got locals Lucky Dragons playing."

The Radiohead frontman doesn't indicate whether there will be additional dates, but with Flea returning to active duty in the Chili Peppers in just a few weeks, the unnamed band might be a weekend-only affair.