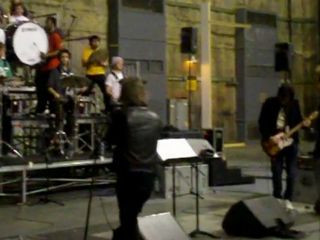 When Radiohead performed their song 15 Step with the renowned USC Trojan Marching Band at last month's 51st Grammy Awards, it was a seamless display of musical virtuosity and mad creativity.

Getting there wasn't so easy, however. For two weeks Radiohead and the Trojans hunkered down and got their act together. And now you can watch the process in this fascinating video below.

Watch as the drumline is put through their paces by arranger David Campbell. A little later there's a full band rehearsal overseen by Radiohead producer Nigel Godrich. Watching Thom Yorke and guitarist Jonny Greenwood work things out with such a large emsemble is absolutely riveting.

And then there's the giddy, breathless night of the awards. The clips include charming bits of the Trojans backstage, brimming with excitement, waiting to go on stage to show the world what they've got. (They even do a mic rehearsal of Tusk, which the USC Marching Band from 30 years ago performed with Fleetwood Mac!)