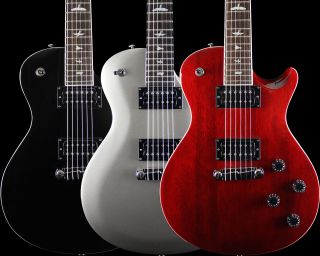 Prestige guitar maker PRS has launched its cheapest electrics yet as part of its Far Eastern-built SE range.

The new SE Standard line of solidbody electrics will start at £399 with six new models that draw inspiration from the Maryland maker's most popular designs. Although they will be the most affordable guitars bearing the PRS name yet, the Standards will retain familiar PRS features such as the bird inlays and PRS-designed stoptail and vibrato bridges. The Standards will also come with a PRS SE gigbag.

The Standard 24 kicks off the range, featuring a mahogany body and mahogany 24-fret neck with a 25-inch scale length. A PRS-designed vibrato and PRS Wide Thin neck profile round out a package that seems aimed at rockers who want a capable, slick soloing machine. PRS-designed HFS treble and Vintage bass humbuckers provide the tonal mumbo. It will be available in Tobacco Sunburst, Vintage Cherry, and Translucent Blue finishes. Opaque Black and Platinum finishes will also be available for this model.

The Standard 22, meanwhile, appears to offer a more traditional, blues and classic rock-focused design. Key spec differences from the Standard 24 include a 22-fret neck, stoptail bridge and Wide Fat neck profile plus PRS-designed 245 treble and bass humbuckers. It will come in the same colour options as the Standard 24.

The Singlecut Standard, meanwhile, offers a yet more traditional spec, including a shorter-scale 24.5 inch scale length. Like the Standard 22, it has a 22-fret mahogany neck with a PRS-designed stoptail bridge and 245 pickups. Colour options will be as for the Standard 24 and 22 models.

PRS's most popular star-endorsed models haven't been neglected, either. The Tremonti Standard looks set to please budget-conscious fans of the Alter Bridge star, and features a 22-fret mahogany neck and SE Treble and Bass humbuckers. It will be available in Vintage Cherry, Platinum and Black colour options.

Likewise, Carlos Santana fans will be wooed with two new models: the Santana Standard, featuring - like the other guitars in the range - a solid mahogany body and neck, with a 24.5-inch scale length in this case, a Wide Fat neck profile and PRS-designed Santana treble and bass pickups. Also new is the Woodstock-evoking Santana Standard Special, with a brace of PRS-designed P-90 pickups. Both Santana Standards are fitted with a PRS-designed vibrato and will be available in Antique White, Faded Tortoise, and Vintage Cherry colour options.