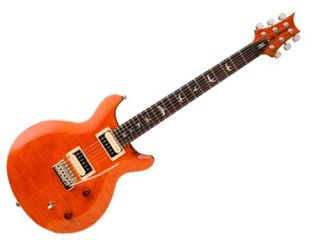 PRESS RELEASE: PRS Guitars' is happy to announce the official launch of the SE Santana.

Carlos Santana's new signature model is the very first SE offered with a 24.5" scale length and is also the first SE created using the same silhouette as Carlos's revered American-made model. Look for the model on retail shelves this fall and on tour with Carlos as he tours the US in support of his new album "Guitar Heaven: The Greatest Guitar Classics of All Time."

Carlos's influence as a PRS guitar player led to the development of the SE electric guitar series ten years ago, and he continues to play an integral role as an advisor, player, and endorser for one of the world's most well-respected guitar brands. In honor this legacy, PRS welcomes players of all backgrounds and skill levels to visit a dealer this fall to try this guitar in person.

The SE is an extremely versatile product line, and the value and quality continue to receive the industry's praises year after year.

"It is very important for PRS and Carlos to offer this high quality Santana model in a financially accessible price point. This SE Santana offers musicians an instrument well in excess of its price tag," commented Paul Reed Smith.