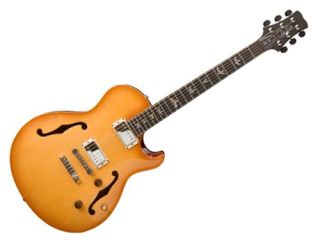 PRESS RELEASE: Whether it's playing on American Idol, his latest gig on Jay Leno's Tonight Show, recording with legendary musicians like Michael Jackson, Elton John, and Ella Fitzgerald, or composing and recording his own music, Jackson's multiple decades as a highly accomplished and versatile musician have factored into this model's development.

The 15" arch top JA-15, though designed with jazz archtops in mind, easily adapts to players performing many musical styles, so it is not surprising that several rock musicians in PRS's artist arsenal are loving this model. PRS's latest appointments are also featured on the JA-15, including two 53/10(tm) bass pickups to give a smooth, balanced tone, the all new thin, hard and crystal clear "V12" finish, and the two-piece adjustable PRS bridge giving the guitar a resonant and musical sound.

"JA-15 stands for both 'Jackson archtop/15 inch' and 'jazz archtop/15 inch.' The instrument has very special proprietary carved-in bracing and a new soundpost construction. Paul Jackson, Jr. and I had very lofty ideas when we designed this instrument, and we think we're there," said Paul Reed Smith.