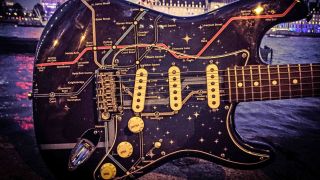 This time last year, you could find us lusting after Fender's white Tube Map Strat; for 2016, the company has teamed up with Transport for London once again for an altogether darker proposition: the Night Tube Stratocaster.

The guitars will be on sale at London Transport Museum from early December, just in time for the start of Night Tube services on the Piccadilly line from 16 December. You lucky, lucky Londoners.

One of the guitars has also been signed by Rolling Stones guitarist Ronnie Wood, and will be auctioned later this month in aid of The Railway Children charity.

If you fancy getting a Night Tube on your track (cough), don't delay - they're available to buy from London Transport Museum for £1,499 apiece. All aboard…