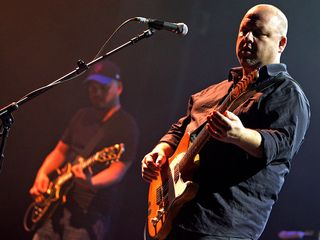 Last night, the Pixies played their first headlining show in Chile, at the Teatro La Cupula in Santiago. Their scheduled performance happened to fall on the very night that the last of the 33 miners who were trapped underground for 69 days were dramatically rescued.

The enormity of the moment - and the coincidence that they were in the same country - wasn't lost on the band, who played a 33-song set dedicated to the miners.

After the gig, Pixies frontman Black Francis said, "We were so moved by this story, by how many lives had been affected by this, and how the Chilean people banded together to support what can only be described as a miracle.

"We wanted to do something to show how affected we were by this, so we played a special set at tonight's show, 33 songs for the 33 miners, the longest set we've ever played as a band. We found out five minutes before we went on stage that all of the miners had safely reached the surface. This was definitely one of the most meaningful shows we've ever played."

Black Francis' introduction can be seen in the above video. While he says he doesn't speak much Spanish, we're not so sure about that. In any event, the 33-song set was a wonderful gesture. Below is the band's full setlist from last night.