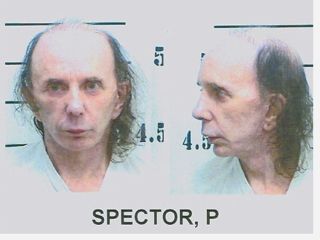 In his heydey, producer Phil Spector was famous for his 'Wall Of Sound," lush orchestrations that graced hits for everyone from The Righteous Brothers to The Ronettes and influenced artists such as Bruce Springsteen and The Beach Boys.

During his more recent days, however, Spector became equally well known for his Wall Of Hair. Appearing in court and charged with the 2003 murder of actress Lana Clarkson, the eccentric producer donned a series of baffling wigs.

Here's one that comes close to looking almost natural.

And here's one that would scare small children and most animals.

Now that he's a ward of the California state prison system, having been convicted of Clarkson's murder and serving a sentence of 19 years to life, Spector has been forced to yield to the state's 'no wigs in jail' policy.

Below is the once mega-producer, photographed sans mop top, on June 5 at the North Kern State Prison Reception Center in Delano, California.

"They took my husband's freedom and dignity," Spector's wife, Rachelle, said to the Los Angeles Times. "So why not his hair?"