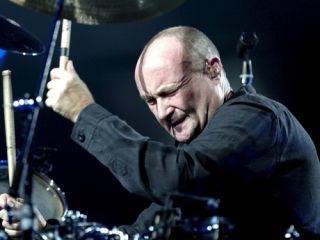 Phil Collins behind the drums during his 'First Final Farewell Tour' in Istanbul, Turkey, 2005. © TOLGA BOZOGLU/epa/Corbis

Genesis singer and drummer Phil Collins says that Going Back, his new album of R&B covers, will be his last ever. "I'm not anticipating doing anything else," he said. "If I do write songs... I don't know about putting them out on an album or anything like that. I don't really have the desire to do that now."

Of his decision to quit music, the artist told Billboard, "It bothers me a lot less than people think it probably would. I've pushed my particular envelope wider than a lot of people probably remember. There's always going to be some things you wish you'd done differently, but in general I'm very proud of what I've done and there's not a lot I haven't tried."

Going Back, which recently debuted at at No. 1 on the UK albums chart (it debuted at No. 34 in the US), reflects Collins' desire to be as faithful to the songs he loves - they include classics such as Papa Was A Rolling Stone and (Love Is Like A) Heatwave - as possible. To do so, he recorded with the three surviving members of the legendary Funk Brothers, who played on hundreds of R&B hits.

"I didn't want to bring anything new to the table, really," Collins told The Huffington Post. "I don't mean that in a negative way, I just think that I wanted the record to be an operative of the period, so you would kind of have that feeling you had when you heard the song originally.

"That was an interesting project to try. My engineer and I listened constantly to the originals - when we were recording with The Funk Brothers, doing my demos, and mixing. We constantly referred back to see what it was that made those records and those songs sound so special, and sometimes, it was obviously the way they were recorded because the technology at the time was very limited."

Collins' next project is a surprising one: he's working on a book about his huge collection of Alamo and Texas Revolution artifacts. "It's a huge collection of memorabilia from the Alamo and before and after it, basically the Texas Revolution in general," said Collins, who was first inspired by Texas history as a child after seeing the Walt Disney film, Davy Crockett. "It's basically the history of all the things I've collected and putting them in the context of the revolution. It's in progress and it's entertaining."

Having written the music for Disney's film Tarzan, we wouldn't be surprised to see Collins reverse his decision to walk away from recording and write the soundtrack for...a new version of Davy Crockett.