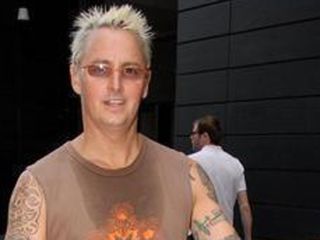 Last Thursday, Pearl Jam guitarist Mike McCready made a special appearance before Washington State lawmakers and urged them to mandate emergency access to businesses' private restrooms for sufferers of Crohn's and related disorders.

For McCready, it's personal, as he is afflicted with Crohn's disease, which is a chronic and painful gastrointestinal disorder that can make finding bathrooms imperative.

"Imagine the worst diarrhea you've ever had, and then times it by 10, with a knife in it," McCready told the Associated Press. "You have maybe a half-a-second to find out where a bathroom is."

Despite the prevalence of toilet humor in today's culture, for McCready, Crohn's disease is no laughing matter.

"I was in the middle of a solo and it hit, and I can't go anywhere because I'm playing in front of 20,000 people," the guitarist explained. "So I just let go. I went back stage and cleaned up, because the show must go on."

The propsal that McCready put before Washington lawmakers would require retailers without public restrooms to allow people with Chron's and other inflammatory bowel diseases to use employee restrooms.

McCready stressed the importance of enacting such a law because many business owners are insensitive to the needs of people who suffer from Crohn's disease and other gastrointesinal afflictions.

Via Spinner.com. For more information on Crohn's disease, click here.