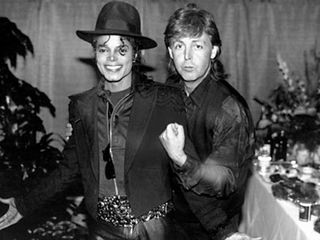 Jackson and McCartney in happier times

Sir Paul McCartney has shared his thoughts on the death of former friend and collaborator, Michael Jackson.

"It's so sad and shocking," McCartney said. "I feel privileged to have hung out and worked with Michael. He was a massively talented boy man with a gentle soul. His music will be remembered forever and my memories of our time together will be happy ones.

"I send my deepest sympathy to his mother and the whole family and to his countless fans all around the world."

Collaborators in the '80s

During the 1980s, Paul McCartney collaborated with Jackson on the track That Girl Is Mine, featured on Thriller. Later, the two paired up again for Say Say Say and The Man, which appeared on McCartney's album, Pipes Of Peace.

However, the two had a much-publicized falling out after Jackson outbid both McCartney and Yoko Ono for the rights to more than 200 Beatles songs.

McCartney has complained bitterly about the situation over the years, saying, "You know what doesn't feel very good is going on tour and paying to sing all my songs. Every time I sing Hey Jude, I've got to pay someone." While he didn't mention Michael Jackson by name in such statements, the object of his ire was unmistakable.

Jackson sold half of the song catalogue to Sony in 1995, but is believed that the entertainer earned over $50 million a year from the remaining share.

Earlier this year, it was reported that Jackson intended to end his longstanding fued with McCartney by leaving him the Beatles' catalogue in his will. Whether this was ever put into writing - and the question remains: was it even possible? - is not known.