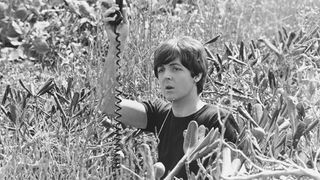 Unfortunately, Macca missed a Hendrix-penned telegram proposing the group, as he was on holiday in Scotland at the time. The telegram, which was sent to Apple's head offices by Hendrix on 21 October 1969 and has been on display at the Hard Rock Cafe in Prague, read:

"We are recording and LP together this weekend. How about coming in to play bass stop call Alan Douglas 212-5812212. Peace Jimi Hendrix Miles Davis Tony Williams."

McCartney has declined to comment on Hendrix's attempts to create what could have been a spectacular pop-jazz-rock supergroup, with his spokesman telling the Telegraph that he is "too busy on his world tour to comb his memory for his thoughts about a telegram sent more than four decades ago." For shame, Macca.