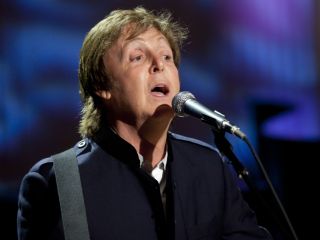 If Paul McCartney has 99 problems, one of them isn't The Grey Album - the 2004 Danger Mouse Beatles/Jay-Z mashup masterpiece. While the execs are EMI were violently opposed to the recording, which used samples of the Fab Four's 'White Album' and Jay-Z's The Black Album, Macca recently revealed that he quite liked it.

"I didn't mind when something like that happened with the Grey Album," McCartney said of the recording that turned Danger Mouse (aka Brian Burton) into a superstar. "But the record company minded. They put up a fuss. But it was like, 'Take it easy guys, it's a tribute.'"

In an interview for the BBC Radio 1 documentary The Beatles And Black Music, to be broadcast next Monday, McCartney offers his thoughts on hip-hop, saying, "It was really cool when [it] started. You would hear references in lyrics, you always felt honored.

"It's exactly what we did in the beginning - introducing black soul music to a mass white audience. It's come full circle. It's well cool. When you hear a riff similar to your own your first feeling is 'rip-off'. After you've got over it you think, 'Look at that, someone's noticed that riff.'"