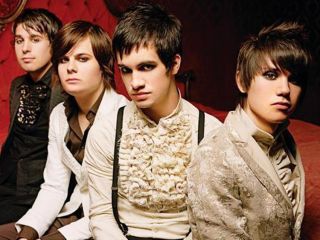 Walker (left) and Ross (right) have fled the Disco

Panic At The Disco just quieted down some, as two members (or half the band), guitarist Ryan Ross and bassist Jon Walker, have quit.

The announcement was made today (6 July) on the group's MySpace blog:

"Ryan Ross and Jon Walker will be leaving Panic at the Disco to embark on a musical excursion of their own. Though the four of us have made music together in the past, we've creatively evolved in different directions which has compromised what each of us want to personally achieve.

"Over the years, we have remained close and honest with each other, which helped us to realize that our goals were different and that parting ways is truly what is best for each of us. We are all excited for the future, you should be too - Ryan & Jon"

Band to continue, shows in August

The message also reports that singer Brendon Urie and drummer Spencer Smith will continue on as Panic At The Disco, and that summer shows - such as opening dates for No Doubt and Blink-182 - will go on as planned.

Ironically, Fall Out Boy bassist Pete Wentz, who signed Panic At The Disco to his Fueled By Ramen imprint, Decaydance, Tweeted today that he was going to hear four new songs from the band for upcoming third album.