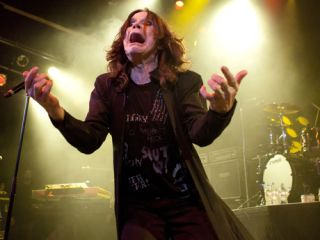 Ozzy Osbourne covering John Lennon? Turns out, it's not as odd as it sounds. The former (and possibly future) Black Sabbath vocalist has cut a version of the late ex-Beatle's song How? to help celebrate what would have been Lennon's 70th birthday this Saturday, 9 October.

Osbourne's version of take How? (which originally appeared on Lennon's 1971 Imagine album) is available today on iTunes. All proceeds will go to benefit Amnesty International. A video for the song will debut on AOL's PopEater.com.

While Osborne might seem worlds away from Lennon stylistically, the Prince Of Darkness has frequently cited the former Beatle as one of his biggest influences, calling him a "driving force for humanity."

The thirtieth anniversary of Lennon's murder is this December, and in a recent BBC interview Osbourne said "the world stopped for me" when he heard the news. "I can't even describe how I felt," he said. "If he was a politician, a soldier, anything else, it would be, 'Oh yeah, well, he is in that kind of business.' But the amount of joy and hope that he gave people was just remarkable."

How? isn't the first time Osbourne has covered John Lennon: On his 2005 album, Under Cover, he recorded a version of the 1965 Beatles' classic In My Life. You can check out a live performance of the song (with Slash guesting on guitar) below.